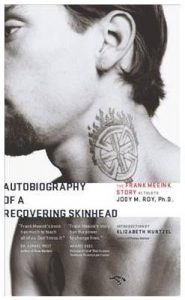 The Marshalltown Public Library will host Frank Meeink, author of Autobiography of a Recovering Skinhead, who will talk about about his personal journey from “hatred to harmony. ”

Frank’s violent childhood in South Philadelphia primed him to hate. He made easy prey for a small group of skinhead gang recruiters. At fourteen, he shaved his head. By seventeen, Frank was hosting a cable access show called “The Reich” to recruit more people into the neo-nazi movement. By eighteen, he was doing hard time in an Illinois prison.

In prison he befriended men he used to think he hated, men of different races. Out of prison Meeink tried to rejoin his old skinhead pals, but couldn’t bring himself to hate those he knew to be his friends. A Jewish doctor offered to get rid of his neo-nazi tattoos covering much of his body.

Behind bars, Frank began to question his hatred, thanks in large part to his African-American teammates on a prison football league. Shortly after being paroled, Frank defected from the white supremacy movement. The Oklahoma City bombing inspired him to try to stop the hatred he once had felt. He began speaking on behalf of the Anti-Defamation League and appeared on MTV and other national networks in his efforts to stop the hate.

In time, Frank partnered with the Philadelphia Flyers to launch an innovative hate prevention program called Harmony Through Hockey. He developed a similar program in Central Iowa. He is featured a film directed by Jessee Dylan with Desmond Tutu called “Reconciliation”, an independent film featuring Adrien Brody and Forrest Whitaker called “The Experiment”, and appeared in a music video with Jamey Johnson called “High Cost of Living”.

This free program is open to teens through adults.